Chatting to a Nurse at the local Hospital last week, I encountered a new term.


We had been dealing with yet another violent idiot that needed help but was refusing to accept it - for an example, have a look here at Kingmagic's post.
Basically, take that scene and transplant it into a busy London Hospital rather than a busy A&E anywhere else in the country.

Our suspect/victim/patient had been spotted having an altercation with a number of drunks in a local town centre. On our arrival, realising he was the target of our attentions, he scoffed all of his copious drugs supply rather than get nicked.

Cue a fight, followed by a roll around, followed by another fight, this time drug fuelled as his gear kicked in.
Of course, he refused medical attention. However we (unfortunately) have a duty of care, so LAS turned up and the not-so willing volunteer was transported up in the back of the Ambulance to the hospital, cuffed and stuffed and attended on by four knackered coppers.

And of course a chipper ambo crew.
Ambo: 1 "Name and date of birth please?"
Patient: "Fuck you, fuck you, I'll fucking have ya!"
Ambo 2: "We'll take that as declined."
Ambo 1: "Right. Doctor's name?"
Patient: "I'll fuckin' take ya, get these cuffs off! AAAGH!"
Ambo 1: "Ok. I'll take that as declined again."
Ambo 2: "Officers, would you mind awfully keeping the noise down? I'm trying to listen to the football results and frankly you're all making a bloody racket back there."

So, into the Hospital. Still kicking off, our man was cuffed with one hand on to each of the trolley rails he has been moved on to. Of course, he got a private room whilst the seventy year old pensioner outside continued to wait, but hey ho. Nurses and all staff were very helpful as always - security were also called to assist if necessary. This is always a very kind gesture, but the combined age of the two frail security guards there is similar to the age of three retired coppers.

Wonder of wonders, a Doctor was pushed forward. But wait, why were the two nurses and the staff nurse grinning? Ah yes, a new attendee Doctor.

"Can you take one of the cuffs off please?"
(Snigger snigger from the nurses)

Five minutes later, after a brief struggle, blood and medical liquids over the doctor, and a couple of extra injuries for all concerned all round, we stepped outside to chat and chill. Sedatives were issued pretty quickly after the very brief initial examination by the Doctor.

I knew one of the nurses quite well, and noticed a large bruise on her arm.
"You OK? Did he get you on the arm? If so he'll be coming in for that"
She blinked, and looked at her arm: "This? No, its fine. It's just a UDI."
"UDI?"
She stared at me for a second - "Yes - an Unidentified Drinking Injury."


Incidentally, yet another time where my boots are caked in blood, as are my trousers. However, we have to buy our own boots and we have been told due to budget restraints we are not allowed to order any uniform until the next financial year.
Wonder if I'll get in trouble for turning up for parade in my boxer shorts?
Posted by Area Trace No Search at 23:50 22 comments:

Quick question to all the intelligent and/or legal minded readers.

My phone is currently set to pick up WiFi signals automatically; there's regular places that I go with free WiFi access.

It's not unusual to see a car parked outside McDonalds on night duty for ten minutes whilst the driver checks their emails - the WiFi signal that McDonalds provides as a free service apparently stretches out to the car.

I remember recently a man getting nicked for parking outside someone's home address on a regular basis and hacking into their wireless internet access - but how does that compare to my phone? Quite a few times recently on crime scenes, hospital guards, constant watches etc, I've spent the time browsing the net.
On a couple of these occasions I've noticed when leaving the internet that I've actually been connected automatically to someone's private wireless access.

This is surprising in itself, simply because I'm shocked that there are still privately owned unsecured wireless networks around.

However, the point for me is this - am I committing an unwitting offence by doing this? 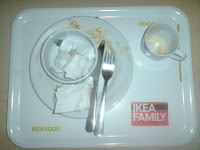 It's interesting what objects you carry on duty and never use - and others that you use that before joining you woudn't have thought about carrying.

Recently my most used piece of kit has been my Ikea Family Card.


NOT - as some might think - because there is a large Ikea store on my patch and with the Ikea card I get free tea and coffee.

NOT because I like to do a little light shopping for matresses whilst on my refs break.

But when I have to scrape the ice of my windscreen (again), it's simply the best.
Posted by Area Trace No Search at 16:42 162 comments: