A PC and PCSO have been attacked and stabbed whilst at a bus stop in London; The PCSO is said to have serious injuries, whilst the PC is believed to be in life threatening condition.

Thoughts with this officer and his family, and his colleagues.

An example of the dangers that are faced by our bobbies, and the willingness they have to get stuck in armed with a can of deodorant and a stick.

According to the news report the suspect was wanted on recall to prison. Which means he was SUPPOSED to be inside but had been released early; then continued to offend on the outside.
His release should bring shame to the people that allowed him out. This incident is fully the responsibility of the person who pulled the knife on the Police Officers. But the people that have created the system where he was allowed out to do this need to take a long hard look at themselves.
Posted by Area Trace No Search at 17:22 20 comments: 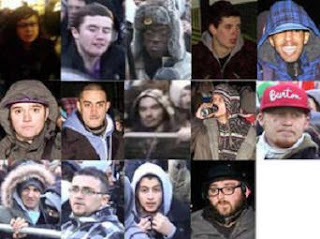 After being involved in a few of the student protests over the past weeks, I had the dubious pleasure of watching last week's events unfold late into the night on the various news channels.

Anyone who has done public order policing trains for this kind of situation, but equally doesn't want to ever face it. Well done to the boys and girls on the front line.

The met has released the pictures above of suspects that they are trying to ID - click this LINK to go to the Met homepage.
Posted by Area Trace No Search at 15:10 17 comments: