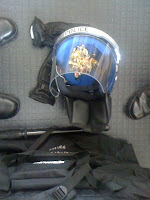 Because of that, it's a nice experience to spend time with less fresh officers.
I actually like going out with probationers, but occasionally it's relaxing to know that I don't have to worry about what the other copper with me is doing, and can just trust them to get on with the job.

I recently had an Aid requirement which was like this - for non Met officers, 'Aid' is when you are sent off borough to Aid other areas or departments with your presence, such as football aid, festivals, protests and the like.
For perhaps the only time I've ever had this, our entire serial of officers (one, three and twenty one) was bereft of probationers, full of skilled and capable officers.

An error on duties part, I'm sure.

Because of this, despite being a very long winded, busy, and violent type of aid, it was also paradoxically one of the most relaxing and straight forward.

Every time we piled into a crowd to stop a fight, I knew that my oppo would be with me. I knew that when we went into a violent situation single file I didn't have to worry about a copper getting lost, or being unable to deal with the situation.
I knew that when we were facing off, hugely outnumbered against a drunken heaving crowd, I wouldn't have to worry about anyone saying the wrong thing to someone in the crowd.

I mentioned this last point to a good mate of mine on my carrier, as we faced off against the braying crowd in question. He had to raise his visor to hear me, so I had to repeat myself.
"Hmmm" came his answer, followed by a thoughtful expression. This was not what I had expected. "What? Don't you agree?"
Another thoughtful face.
"Well now Area, yes, in theory I do. But instead of a half dozen probationer officers guaranteed to say or do the wrong thing, we have you instead."
Outrage. This from someone I had considered a friend, for years. "I resent that suggestion, and demand an apology."
"Area, you're a nice fella, but you know as well as I do that the public order manual has nothing about bringing a packet of joke sweets to work and offering them to the other coppers on your serial. It has even less about offering said sweets to crowds of thugs. Do us a favour, I want to get home before daylight tonight. Just shush..."

Firstly, thank you to the many people that have come out of the woodwork and emailed or commented, especially the exceedingly polite emails that say in brief that they don't like my blog or subject of writing but still feel I should continue.

I am going to continue blogging, albeit cautiously.
So far, only one person in the Met knows about me and this blog - as of last week, this changed.
It's now two people.
I've asked the advice of someone who knows about this sort of thing and works in the kind of department that could be involved in 'getting' me, and she has been very supportive and helpful.

Basically, if I get fired then it'll be because of racist, sexist, or derogatory behaviour rather than simply having this blog.
Hopefully.

Because of that, I feel it's only right to start posting as much derogatory behaviour as possible.

Stand by for (many) further updates, as I've been writing posts without publishing them.
Some involve squirrels.

And by the way - Sierra Charlie is back. Drop by and say "yo homey" or something equally as 'street.'
Posted by Area Trace No Search at 14:19 187 comments: