Thoughts of The Day 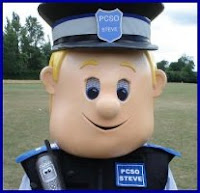 A couple of thoughts.

Firstly, I have been playing with my mobile phone a lot recently - crime scenes give you ample time to fart around doing things that you wouldn't usually do.

At 3AM a couple of nights ago, I was struck by a thought, whilst experimenting with the Predictive text feature.

I was texting another copper and asking to meet them in Trafalgar Square. Interestingly, my phone does not recognise the word "Trafalgar."
It does, however, suggest an entirely plausible alternative of "Upbealias."
Even more interestingly, although not allowing me to type that word, someone has gone to the effort of teaching it the word "Egalitarian."

My point, although a little obtuse, is that I think that the people who programme mobile phone dictionaries must be the same people who set Policing targets and priorities.
Only these type of people would consider that "Trafalgar" is a completely unknown word, "Upbealias" is a better alternative, and the word "Egalitarian" is much more useful and likely to be used.

Part of me feels good about the fact that these people exist in the private sector as well as the public sector...


Secondly, is it mean to gently wind up PCSOs? I've always enjoyed winding up Police Officers, but I know that CSOs are a relatively new thing and might get more offended.

If it's not too naughty, a colleague of mine has found a novel but harmless way of playing with our blue-shirted colleagues. I'd never do it of course, not least because my CSO acquaintances would gang up on me and beat me up.
Incidentally, please pop over and say hello on the following PCSO blog.
Posted by Area Trace No Search at 22:50 16 comments:

This post will probably make me unpopular with the public and the Police equally, but knife crime is in the news so much at the moment it seems daft to leave it alone.

There has recently been a 75 strong anti-knife crime unit set up by the Met to help out, and good luck to them. I do have to wonder where the seventy five officers came from though, and whether another desperately short team is now even more desperate.

On our response teams, we can also prevent knife crime. Until our numbers were so sorely depleted, we used to put out Q-cars, a plainclothes unmarked car, every night duty and some day shifts. I haven't seen one put out by our team in months.
CID and the Robbery Squad also used to go out hunting, but their hours and staff have been reduced to the point where CID especially are struggling to keep up with their workload that is already on their plate when they come in. Sometimes our night duty CID cover is one lone officer, and I don't expect him to start scouring the street for knife carrying feral gangs alone.

We struggle on our response team to put out the numbers and get to the calls, as I have talked about recently. This means that proactive patrolling, although the most enjoyable part of policing, is rarely if ever done.

Although this is unfashionable, some officers are scared. Not all of us, all the time - but scared we sometimes are.
When we approach these groups, there can be more of them in one place than every single officer in the division. And some, if not most of those officers will of course be dealing with other things. So we know that if it comes down to a real violent situation, in the short term we will lose.
We still approach them, and still get assaulted of course, but it does put you in a thoughtful mind sometimes. Sometimes the control room will not even let you approach groups if you put up you're going to go after them.
We're scared of complaints - we're told we're harassing people. This we are, but that is because, as I said, we know where these knives are - but turn up in a marked Police vehicle with officers in uniform, and most people will have plenty of time to ditch or hide their weapons before our approach.
Often we use stop search as a deterrent, as a nuisance rather than a finding exercise.

When we get lucky, and get someone who is armed and arrest them, we hit the next problem. There will be no handover team if it is weekend, evening, or night (and the handover teams are so busy that often they can't take the jobs on during the day).
So that is probably you and another officer off the road for the rest of the shift. Plus any further enquiries you many need to make before the court case. I am assuming they are charged.

This means that whilst you are sat inside dealing with your body, you cannot deal with the constant, frantic calls that are being put out. Knife fights, serious assaults, domestics, serious car accidents, pub fights, sudden deaths... all are coming out over the radio and you can not assist with any of them.
Neither can your colleagues. They are either tucked up with arrests of their own, or already at or on the way to calls. There are ALWAYs calls outstanding, some hours old.

Don't misunderstand me - my colleagues and I want to arrest people carrying weapons. We want to drag self created arrests in, and do more than just respond to calls. But we don't have the time and resources, and until a more efficient way of dealing with arrests is put into place, this is not going to change.

Like most Police bloggers, I don't think we need more police officers per se. What we need is those officers out on the streets, providing a visible presence, and getting in the way of the persistant criminals. And we need to be helped to do our jobs, rather than constantly hindered in the execution of our duty.

If that happens, then simple - knife crime, and many other types of crime, will fall.


EDIT - the link to the news story where the photo above came from is here. It is a scary set of photos, showing incredibly brave, unarmed officers dealing with an armed, angry, dangerous individual with mental health problems.
Posted by Area Trace No Search at 12:06 20 comments: