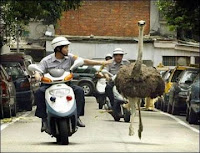 I was drinking with a good friend and colleague of mine recently, and ended up thinking back to my college days. My first kiss was from a girl a couple of years older than me, called Denise.
Her Dad ran the local scrapyard.
The song "Stuck on You" by Lionel Richie was playing and I was frankly terrified.
And slightly bemused, if I'm completely honest.

Anyway, shortly afterwards she broke up with me and went out with my mate Dale. Dale was shorter than most people of our age, but a great footballer. Fair's fair.

Fast forward a year or two (ok, maybe quite a lot more) and I've had my fair share of break ups and break downs.

The interesting thing is that I've managed to break up with and be broken up with, and on each occasion I've managed to do it without involving the Police.
Yet, I often feel I'm in a minority there. As any Police Officer knows, no matter how ridiculous you may think your 'issues' are, our informants from our calls can always beat them.

There is almost nothing that will not be sent down to a patrol unit to deal with. Unfortunately, if a call is a "type 29" - ie a domestic, then a unit will have to attend. Regardless of whether a crime has been committed or even alleged. In fact, regardless if a crime is even possible.
A domestic type call is anything that refers to a call between a husband and wife, boyfriend and girlfriend, exes of any description, siblings, parents, family members and any sexual partners past and present.

In the incestuous estates we inhabit on our day to day patrols, these are most of our suspects, victims and witnesses.

As soon as the domestic tag is applied to a call, then everything that follows is out of our hands. If we attend and there is no allegation at all, no injuries, no hint of violence, then we only have to do the following: Full statement from each party involved; A statement from the officer on scene; A twenty six page domestic violence book; A Full 'non-crime' Crime report on the computer (taking between forty five minutes and an hour and half dependant on typing skills); A seperate computer report on any children or vulnerable people in the premises or involved in any way. So you result the call, justifying your actions. Then complete all the above, justifying your actions. Then you bring all the above to your Sergeant, so he or she can then justify your actions.

Keep in mind that these are for NON crimes. When there has been a crime or an allegation made, then obviously you arrest and all the above is used as evidence.

Amongst the many, many calls I have been to needing all the above for a non-crime domestic are a psychic wife who had had visions that something bad was going to happen to her husband, a woman who had called police because her boyfriend wouldn't get off the computer (relatively common, that), a woman who had called police as her boyfriend had cheated on her and wanted him arrested for it, and many, many "threats" by text. Of the "u slag u shaged tracy an shes got hiv i hop u get cancr" type.

Examples from other officers are always welcome.

I'm in a stable relationship at the moment, but even in my worst relationships I have never felt the need to call my colleagues down to join in. In fact, I've always wanted to keep my private life... well, private. 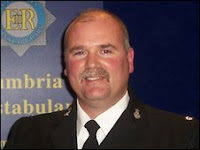 
I'm sure that his colleagues at the moment are grief stricken, and equally sure that they are still out at work helping in the flooded areas in Cumbria.


At the same time, I read about Wootten Bassett turning out again, this time for the 100th repatriation.

My admiration for that town, turning out repeatedly to honour returning fallen troops, is boundless.
Posted by Area Trace No Search at 11:58 11 comments:

That was the good news, as provided by an anonymous commenter. Thank you.


Now, go look HERE at Gadget's blog.
Most of the time I avoid any type of political comment on the Police. Gadget, Copperfield, Nightjack and many others have that covered in a more eloquent way than I could ever hope to do. In fact, you'll be pleased to know that due in part to my dimness, and also in part to my being knackered, it took me three attempts to spell "eloquent" just then.

However, Gadget's post above just infuriates me. A particularly brave officer is injured and the Chief Constable unable to comment as he is a serving officer.
As a serving Police Officer myself, there's obviously no way I'd suggest that people should email into the Police Force mentioned and take the Chief to task for what I see as pretty appalling behaviour on his part. 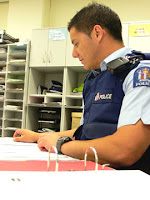 Shortly before my enforced absence from both the blogging and Policing world I got an email from a Police Officer with perhaps the funniest signature I’ve read in a work communication.

It was so funny that I had to ask the officer concerned whether he actually used it – he told me that not only did he use it, but that almost no one had noticed.

This was either a joke that I didn't get, or an elaborate lie in order to test my credulity.


Alternatively, my Inspector is more observant than his.

My numerous attempts at creating signatures were quickly thwarted. My first three were trialed in emails to my whole team. I knew when my Inspector had read the first by two methods. First, my outlook folder has the "read" reports turned on. Secondly, after fifteen seconds there was a bellow of "AREA!" from the office.

After the first three, I simply sent the next ones directly to the Inspector for him to proof read. I'm relatively sure that he may have found at least one amusing, and also just as sure that he doesn't even have a computer at home - let alone the will and ability to waste his evenings off reading Police blogs.

So, any suggestions at an email signature are welcome. I will actually use the best of them- but acting on my Inspector's orders, I am not allowed any reference to: obesity, teenage obesity, any type of warfare, Dog the Bounty Hunter, or CAMRA.

Nor any mention of fishing, hypnosis, or ripped jeans.
Posted by Area Trace No Search at 21:23 24 comments:

The Least We Can Do 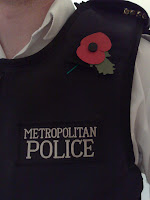 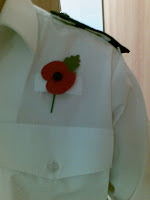 Labels: remember, the least we can do
Newer Posts Older Posts Home
Subscribe to: Posts (Atom)