Nurses - the biggest friends of coppers, or their greatest cause of downfall?

Incidentally, despite what the gorgeous, innocent, fresh faced Nurse tells you whilst visiting their hospital, it is important to remember a few salient points.

1 - You are a male in his twenties, talking to a young nurse. What organ do you really think you are using for your thinking?
2 - Despite her relatively short life, she is not nearly as innocent as you think and will have dealt with and done things you haven't. Don't even try and cross her.
3 - She won't be impressed by your stories, so don't even try.
4 - If you mess up with her (and you probably will - see point one again), you may face the prospect of having an entire A&E shift turn against you. This is bad. You then may face the very real prospect of having to go there for medical treatment after an injury on duty. This is very bad.
5 - Despite what they tell you, Ethanol and Dr Pepper is NOT an appropriate substitute for "real" alcoholic drinks. You will get sick, I promise. See point two again.

Just a quick post - The past couple of days I've spent mainly on foot, dealing with a large variety of dribbling, drunken, stoned illiterate wrecks whilst trying to keep my sanity.
And no, this time I am not referring to the senior management team.

Dealing with wasted people is par for the course, and can be funny - but after many, many hours of it even the most saintly Police Officer finds his or her patience ebbing away. Days of it and a snarl becomes the appropriate response.
With the people that have gone beyond mildy abusive, into all out fight anyone mode, we have the delicate situation of trying to perform our duties as Constables and keep the peace, whilst also bearing in mind the "try not to nick anyone" missives from the senior management team.
After all, it's family fun for all.

All this whilst sweating in full uniform, long sleeve shirt, protective vest, hat and (of course) the wonderful sweat suit that is the high-viz jacket.
In August.

"Job" readers will probably know what I have been doing at work for the past two days.
Non job readers, please see this post and look up "Not Carnival Related" about halfway down.

Joy of joys - back again tomorrow.

I was at a regular tea spot haunt the other night, having a quick drink and something greasy and unhealthy to eat. Most night shift workers will know the place - it's where Police Officers (often from different forces and areas), Ambulance Crews, RAC and AA Crews, Truck Drivers, and Cabbies all end up socialising as they wait for their sausage inna bun.

Whilst chatting to a couple of ambo boys, they told me a story that made me laugh out loud, but made my partner, Tom, recoil in horror and look at me funny. In retrospect it's probably both funny and horrific.
So I thought I'd pass it on.

Both of the ambo lads were paramedics, who usually work on the solo fast response cars.
One night shift in the very early hours of the morning, they had parked up by the river next to each other for a chat and a cup of tea, whilst waiting for the calls that never came.

Of course, warm drink, heaters on, both of them fell asleep.

As one of them described it "The next thing I know, a pissed wailing banshee is hammering on my window and screaming at me."
A very drunk female woke them both up, shouting that a man was hanging himself.

In front of them.

Surely enough, that was what had happened. Whilst the ambo crews had slept, a depressed and also very drunk young man had walked up, tied a rope off a post, and lowered himself on to it. The drunk lady had noticed from a distance and ran to the paramedics.

As the crews described it, they literally woke up in time to see the man drop in front of them. Makes waking up to an alarm clock suddenly seem so much more bearable.

Both paramedics obviously leapt out and dealt with it, and the male was taken to hospital, no serious injuries at all.

Now, obviously if the man had succeeded it would have been a tradgedy. But what made me giggle was the panic the ambos must have felt on A)waking up from an illicit sleep, B)having a screaming banshee hammering on their windows, and C)seeing a man with a noose around his neck lower himself in front of their still bleary eyes.

One of the paramedics told me later that as he was cutting the man down and working on him, the whole time he kept imagining waking up in the hazy dawn light with a corpse hanging in front of two fully marked ambulances.
Apparently they haven't had any more illicit snoozes in public places since then...
Posted by Area Trace No Search at 11:50 27 comments: 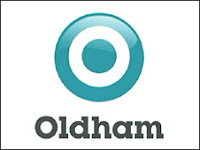 An interesting news story, about an obviously very naughty and reprehensible act by some council employees in Oldham.


Luckily there was a PCSO, I assume from Greater Manchester Police, on hand to assist and stop the offenders in their tracks.
Some good publicity for CSOs.

1 - Was the PCSO watching for the full twenty minutes? If so, surely s/he must have youtube evidence at least.
2 - Twenty minutes!? Is that physically possible? Wow. Give the man a medal I say...
Posted by Area Trace No Search at 19:47 14 comments: 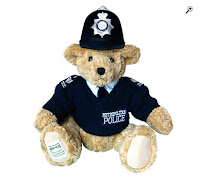 More and more, we are starting to worry in our team about our Sergeant.
He has always been on the eccentric side of the camp, and in fact, has happily described himself as "bloody mad" before.

At first, they were minor things. Things that made me chuckle - like when he was put in custody, a prisoner was brought before him, and the good sergeant brought out a coin of foreign denomination with a head on both sides. He then proceeded to tell the prisoner that he was going to decide bail on the flip of the coin, heads no bail, tails you get bail...
He hasn't been posted as Custody Sergeant for a long time.

This, and other striking traits has always endeared him to me. Like many long-serving sergeants, his knowledge of most law is vast and in a critical incident he kicks into action, and obviously knows the vast majority of police procedures back to front. He even nicks people occasionally.
But outside of these kind of incidents, he potters along in a bemused way making jokes that aren't funny and asking questions of officers that have little or no basis in reality.

Recently though (and I appreciate this may give a clue who I actually am), he has taken to going everywhere with a small cuddly toy in tow, the kind of thing you get free with a McDonalds happy meal.

He is inordinately proud of this toy.

He clutches it close whilst talking to senior officers, sits it on the desk whilst supervising crime reports... and chats to it all the while. Even whilst no one is about.
This is fine by me, but some of the other patrol sergeants are starting to get that weary, I've had enough face when sitting opposite a sergeant having an animated conversation with a fluffy toy: "What's that Ruffles? Under the Home Office counting rules this crime report might be better classified as a criminal damage. Hmm, you may be right."

I recently had the pleasure of driving him about on a night duty, and I can testify now that Ruffles (not his real name) was safely buckled into the back of the supervisor's van before I drove anywhere. At one point we went to a fire, and the sergeant got him out to sit on the dashboard.
Apparently Ruffles likes fire.

All this is well and good - the Police has always had a comforting way of welcoming eccentrics into the ranks.
But Ruffles must go.
Our sergeant has started deferring questions to Ruffles. Acting Sergeant Ruffles as we must now call him.
Ruffles has even started countermanding our sergeant's orders.

Last week Ruffles denied an annual leave request I made.

Here is my level II kit, washed and ready for action again. 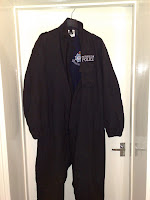 Look closer... is that an issued t-shirt?

It is Ruralshire issued kit, which, lets face it, is more comfy and practical than the kit from my force, and at least turns up within the decade I order it. 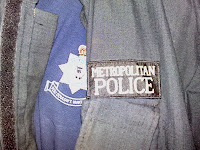 Thanks to the Guvnor for authorising the uniform request.


Mutual aid is a wonderful thing, not least because coppers get to moan to a new audience, play tricks on new victims, and show off their kit/get depressed about other forces kit.

Sometimes it makes you proud.

Driving along the A-road, watching carriers come the other way.
From many forces, travelling from far and wide.

A couple of kent carriers, glorious in their battenburg markings, officers with ties on, speeding past at a decent speed.

Ditto the two carriers from Wales.

Then the met... two dirty, twelve year old carriers - one with a van load of coppers asleep in the back, the second with no ties and window lickers.
Ten minutes later, another Met carrier. This one leaning to one side at an alarming angle, as though it was tacking against the wind, making a rattling sound that carried over the busy road and through the car's soundproofing. 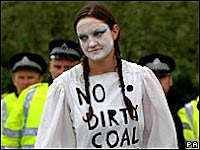 Look at the Police Officer's eyes.
They are praying for the arrival of our most trusted, effective and powerful colleague, PC Rain.

Thank God for the arrival of PC Rain.
Posted by Area Trace No Search at 18:57 9 comments: