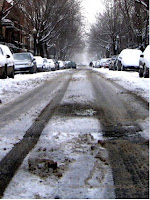 In case someone in Britain hasn't noticed, it has been snowing. A bit.
This apparently is a recipe for DISASTER. I believe that it is a fact that I am one of the only adults in the whole country who has ever seen this type of precipitation before, let alone driven in it.

At least, that's what the news items would have you believing.

Inspector Gadget once again sums up my feelings perfectly about snow and Policing. So much so that there isn't a lot of point me expanding on it.

Instead, I'd like to tell you a story about what happened to me a few hours ago. Driving along a less gritted and less well known track after having refs, I spotted a group of oiks hanging around at a corner. They'd eye - fucked me as I'd driven past earlier, and so I took a little more interest than I would usually. Especially when I noticed them packing their snowballs hard into their gloved hands.
Not a problem. I slowed down and waited for it - sure enough, the barrage of ice balls came and reverberated off the windows and doors with loud bangs. The little darlings.
Obviously, I'm beyond stopping the car and yelling at them for a little bit of snow ball action. Besides, then I'm pretty sure that there would have been a second supply of snow balls, and I hate having to dry my uniform.

However, a rear wheel drive car in the snow does have it's uses. A little squirt of the gas caused the back wheels to spin, and spray said oiks with the lovely brown, dirty slush that collects on the road in weather like this.

Was it wrong of me to find this the funniest thing I've seen in days?
Posted by Area Trace No Search at 16:07 62 comments:

However, another, more pressing item has come to mind regarding the jubilee. Do any coppers know if this is another chance for us to get easily earned medals...?


Before anyone asks, I'm trying to not to even think about Jack Straw. Lets face it, even the medal made me start to seethe about politicians.
Posted by Area Trace No Search at 21:59 8 comments: