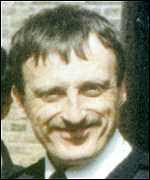 A very quick post - perhaps there is more good news after the Guilty finding of our mate Ali.

Police have now arrested a suspect for the Vicious murder of PC Keith Blakelock in 1985.

The story of his death is well known, but as a small reminder of the horror involved in the attack, he lost his fingers trying to defend himself from the repeated slashing from multiple weapons. 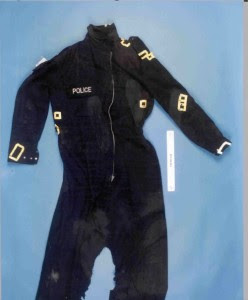 A photo of PC Blakelock's Public Order suit - each white tape represents a seperate stab or slash wound on his body. 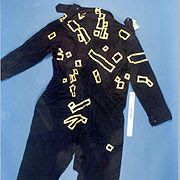 The back of PC Blakelock's suit - after he had turned over to try to protect himself, he was attacked repeatedly from the back as he lay on the ground.


Good luck to the team investigating it.

Labels: officer down, remember, RIP, the least we can do 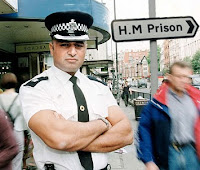 A crook in uniform is as much a crook as one that breaks into your house late at night to nick your tv, if not more so.


Commander Dizaei has at last been found guilty, for Assault, Perverting the Course of Justice, and Wrongful arrest.
He's a shameful example of how appallingly a small minority of officers behave - and a reminder that rank doesn't always equate to a good person, let alone a good copper.

The Black Police Association were hugely verbal throughout, stating that Dizaei was innocent, and accusing the Police of racism for charging soon to be ex-Commander Dizaei.
This despite the victim also being from an ethnic minority.

Disgraceful behaviour on his part. When you "accidently" delete the texts that apparently were sent to you, and are believed by doctors to have self harmed in order to set someone up... I'm just glad that he no longer wears the uniform that I do.

Again, embarassing. Firstly, his shout for 'Urgent Assistance.' This is a Golden phrase, and when used EVERY copper on duty will run - firstly from your area and neighbouring areas, then central units, then potentially met wide. If a Police Officer is in dire straits and is about to get seriously hurt, we will do anything including putting ourselves at risk to get to you.

He used this assistance call for his own lies - and listening to the tape, even if the arrest had been justified and truthful, there is no way that he is in an urgent assistance situation. He is calmly talking to the detained male (who was by the way in handcuffs) and frankly I'd be hard pushed to understand a brand new probationer calling for urgent assistance in those circs, let alone a supposedly experienced officer.

He also used bullying tactics and ordered the operator to let him speak to "Chief Inspector IR" - Chief Inspector Information Room. Whether he thought this implicit threat would help, or that he was entitled to special service because of his rank, who knows... I'm sure that if I called 999 and demanded to speak to Chief Inspector IR I'd be given deservedly short shrift.

And lets not even get into the hows and whys of him being in uniform, off duty, in a cafe, conducting private business deals, with handcuffs to hand.
Actually, why hasn't this been dealt with?
Posted by Area Trace No Search at 17:53 84 comments: