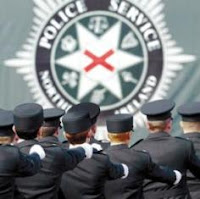 I've been away from the computer a lot recently due to a very busy period of shifts and a couple of crown court cases. Added together it means I've had single figure days off in the last month or so.

No sympathy needed, as I got paid for some of it for once.

A quick post today - as many blogs will be saying, thoughts and prayers with our brothers and sisters in the PSNI at the moment, after THIS

Coming so soon after the attack on the army base, I just hope that this isn't a re-emergence of a greater threat in Northern Ireland to the security forces there.

Some of you may remember Belfast Peeler - he was one of my favourite (and in my opinion one of the best written) Police Blogs, until he was pushed towards making the decision to stop blogging.
I know that because of the way his blog was set up, he still receives any comments that are left on the site, even though they're not published.
Bearing that in mind, please take the time to pop over and leave a comment saying hello, passing on best wishes or condolences to someone who is now working in a more stressful Policing environment than most of us do.

Not a good time for the PSNI, nor the men and women of the British Armed Forces, home and away.
Posted by Area Trace No Search at 16:47

My Heart sank when I heard about the shooting of the army lads and the others. Indiscriminate killing again In NI. I know the PSNI have been targets for shootings even though the peace process has been progressing better than many of us thought it would. I was fortunate never to go to Aldergrove, though I know many who did go. I just hope that no nutters think that this will be a good thing to copycat.

Good to have you back and I used to really enjoy Belfast Peeler so I will nip over and leave him a message..x

As a regular reader of your fantastic blogs and a soldier I thank you for your kind words for our fallen. May they rest with God. R.I.P.

Amazing people, the RUC. Throughout the Troubles they would always receive the utmost respect and support from the rest of the British Police. I still have my Rupert badges. Their Fed Reps always got a standing ovation at annual conference and yet these remarkable men and women seemed almost embarrassed and would always play it down. That support remains, now shown to the force called the PSNI.

The subtle difference this time, as I mentioned on my own post, was that this time McGuinness and Adams are speaking out publicly against what happened. Call me a cynic.....no I'll leave it there.

Respect to the PSNI and our servicemen and women, everywhere.

Particular respect to those in the PSNI and serving in our armed forces but also to all of those who are out on the street every day keeping the peace. Most of the time you do it so well the rest of us don't even notice.

I am not cynical about what Adams said. I think it shows how far we have all moved from those dark days which were not even so long ago.

The fact that the PSNI has a quarter of its officers drawn from the Catholic community is incredible. Fair play to those first few Catholic officers to have the balls to sign up to protect the whole community.

And a standing ovation to those who will go into the Lismore Manor estate and others like it again and again to answer calls, knowing they might face murdering bastards at any moment.

I became Diablo 3 Items fortunate never to visit Aldergrove, however I know lots of people do get. I just trust which virtually no nutters feel that this really is a veryBillig WoW Gold important thing to help copycat.