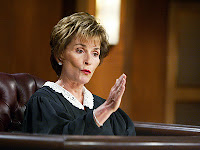 A quick post, on the Judciary. This has been inspired by a post on a blog I have recently discovered, and more specifically the comments within.


I have no fear of arguing with Magistrates or any part of the legal system whilst blogging - but I do think that most magistrates still do care.

The problem is the system is not designed for caring.
The CPS often are the reason that Magistrates end up making bad decisions (just as members of public for coppers). In both cases we depend on them and a score of other people to feed us the correct information. Often that doesn't happen.

All too often CPS do not offer the case to court at all. All too often when they do, it is either as a lower charge than it should be, or just badly prosecuted. CPS prosecutors are often inexperienced and in fact some are not qualified as lawyers - in a way they represent the worst of both worlds, and I do have some sympathy with them (sometimes).
Their job is to represent victims and the police despite having no real world experience of either on a meaningful basis, no street experience. They are also supposed to be a link to the legal process and judiciary, despite often being unqualified and regularly inexperienced in that field.

Not exactly a win-win situation is it?


On top of that, they get judged on PERCENTAGE of cases won, rather than amount of cases won. So often, they simply won't fight them.

One of the many knock on effects of this (apart from offenders getting clean away, victims and witnesses feeling let down and Police Officers losing their rag) is that the Judiciary don't see the "characters" that have been arrested with the regularity that they should.

Often I hear complaints that they are out of touch - and yes, some are. Most have come from different backgrounds to the average suspect and victim that I deal with, and this can be an issue. But the way for them to even have a chance of staying "in touch" is by being presented with the suspects, the crimes, and the victims and witnesses on a regular basis, seeing the little buggers in front of them again and again, and being able to take direct action against the people they personally see as repeat offenders.

CPS do their best to make sure this does not happen - as do Penalty Notices for Disorder and Cautions.

This is before we even get to the minefield of sentencing guidelines...

Yes, some Judges are beyond out of touch. Yes, some create bizarre decisions that the vast majority of people struggle to comprehend. Our legal system is not perfect; most Police bloggers show that our part alone needs a lot of help.
But I think that sometimes, it's too easy to blame the person sitting on the top of the tree rather than the person who grew it in the first place.
Posted by Area Trace No Search at 18:45

you really are a complete wanksr aren't you "area?"

It's good to know that judges have no respect for the police, neither do us public that have to suffer from your so called "policing."

I'm having a hard time of it at the moment, trying to persuade the CPS to drop a theft charge made against me from a particularly vindictive ex-housemate of mine.

First I knew of it was when 2 cops called round and said that she'd alleged that I had stolen a CD. I denied this, but said that yes, I did have the CD, as it was mine. I produced it, they seized it and they arrested me! For the theft of a 3 year old CD! I spent 7 hours in a cell, was interviewed by a not-very-sympathetic PC and bailed. When I returned at the end of the bail, I was shocked to hear that I was being charged, and had to appear before the courts! Obviously I pleaded not guilty, and the trial is going ahead soon. But my solicitor said she's amazed that it's got this far, as it's not in the public's interest to put me before the court for a CD worth £5, if that, and which it is very difficult to prove whose it is in the first place!

I don't have too much respect or sympathy for the CPS or magistrates, I'm afraid.

It used to be said that the public got the Police Force they deserved. That was before Nu Labour however, who have ruined everything.
Anon 23.35, you have missed the point. The so called Policing you suffer comes not from the Police themselves, but directly from a meddlesome Govt. If you read the blogs you will see the common theme.
Anon 00.19, as above. A few years back the Police would have told the 'offender' to give it back. After all the 'offender' probably only borrowed it and would have given it back anyway eventually.
'De minimis non curat lex', seems to apply.

anon @ 00.19
I had a job very like this one recently. Fortunately I have some common sense, as do my superiors, and it was dropped like a hot potato before it could do so much damage.
Sorry to hear you've had the shitty end of the detections stick.

If I were the beak on the CD case, it wouldn't be a long one. No intention to steal, unclear ownership, no permanent deprivation etc . I am heartily fed up with the CPS failing to adhere to their own charging guidelines, and poorly presenting cases. Recent case of a glassing, with stitches in a caution. My daughter was hit last week by a driver on the phone. Loss of use of an arm, an end to her running career (permanent due to spinal damage) and guess what....another caution (even though he admitted everything). Not good. If we want a justice system we have to invest to deliver it.

Good post, and agree. All to easy to shoot the messenger.

As a representative - however minor - of the judiciary, I have to argue that Magistrates are not out of touch; indeed they are appointed because of their common sense and knowledge of the community. Their problem is that they have to accept what the CPS can be bothered to tell them and at least listen to the arguments of the defence.

By the time a case leaves the police and lands on the prosecutor's desk it is reduced to a bare minimum for speed (CJSSS) and if a guilty plea goes to a probation report then the final sentencing magistrates may only hear a few words about the offence. Little wonder then that the decision they make on the evidence they have from the guidelines they are issued with bears small relation to reality.

I would not Cheap D3 Goldbelieve Mr Blair's leaving comes as any type of amaze, so to find out exactly why he's eliminated, make a note of most of his formalGuild Wars 2 Gold remarks and also figure out the contrary ones. Hence, the truth.